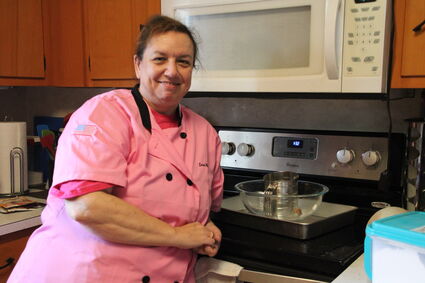 A homegrown cake and cupcake business is starting to get its legs in Hartley.

With the promise of “quality cakes for a little dough,” Lauri’s Cakes has seen increased attention in the last few years. Owner Lauri Myers has expanded her customer base via online outlets The Knot and WeddingWire, which has complemented a loyal local following.

“If a family is on a very strict budget and can’t afford a whole lot, I will work with them,” she said. “I’m not too afraid of challenges. I’ve been coming out of my comfort zone so I’m a little bit more diverse.”

Originally from Ruthven, Myers started baking cakes full time in 2009 when she lived in Arkansas. She had been working for a law office when the firm moved locations, and she decided she was ready for a change.

“I just thought it was the right time to do my own thing,” she said.

Myers has honed her craft in the years since. She prefers simple cake orders, but has been branching out to more difficult designs. Lately she’s been experimenting with fondant icing made out of marshmallows.

The baking operation is an on-demand business. Myers’ busiest months are April through June, and then things pick up again August through October. She makes everything from scratch and goes through a period of trial and error when trying something new.

“I’m trying to constantly change things,” she said. “I experiment and try new things. If it doesn’t work, I’ll pitch that. If I decide to come back to it later, I will.”

Myers owns an image printer that creates edible photos to put atop icing. As far as the icing itself, she said the hardest colors to make with buttercream are black and red.

Difficult orders may come here and there, but it will be hard to top her all-time weirdest request – pickle cake.

“You take pickle juice and chop up pickles, then incorporate that into the cake,” she said. “I do not recommend it. I even put peanut butter icing on top just to see if it would work. They asked me to come up with a cheeseburger cupcake, but no.”

Online partnerships have allowed Myers to expand her brand. She still likes to keep things as local as possible, though, and the farthest she’s traveled so far is south of Storm Lake. 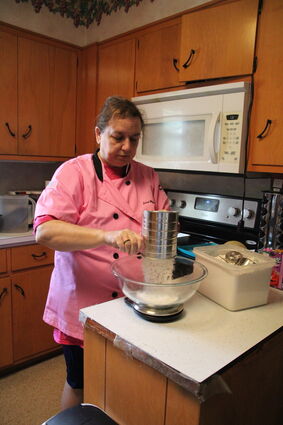 A regular order usually takes her between 4-6 hours to complete. Family and friends help her decorate for large wedding orders, which take up to two days to finish so everything is ready for the customers’ big day.

Myers is honest with patrons when they ask her for special requests.

The Hartley woman wants to expand her baking space by possibly moving her setup to the basement of her home. Beyond that, she would love a storefront some day.

“I would like to branch out more, but the primary focus would still be cakes and cupcakes,” she said.

For now, Myers is content in her element and plans to keep pumping out confections to the masses.

“This is my zen to crazy family life,” she said. “I love baking for people.”