I have a friend who’s family is Dr. Who fans, in case you don’t know who Dr. Who is, well this is a summary; He’s a time-traveling alien from the planet Gallifrey. He makes his way through all of space and time in a spaceship/time machine shaped like a British police box (think of a blue phone booth). This vehicle is called the TARDIS, which is short for Time and Relative Dimension in Space. This show is originally from BBC. So with this in mind, I bought two molds of the Tardis.

I bought Wilton Candy Melts to match the color of the Tardis as you can see from the next picture. It was a fun experience! Frustrating considering I hadn’t done it before. I ended up scratching the previous attempts before 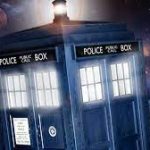 finally making 2 complete “bricks” of the Tardis that sat on top of the two sheet cakes. They felt like bricks because the only option I had given the time frame that I needed to have them delivered an hour away was to fill the entire mold of chocolate! Not that 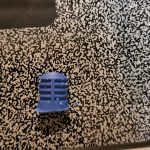 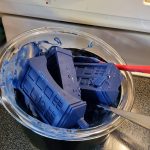 either graduate were complaining of course! 🙂 It turned out ok!

The end result wasn’t too bad, everyone was happy! I wouldn’t mind doing this again, just to see what else I can do! 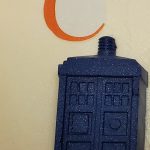 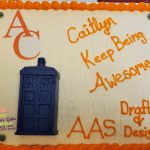 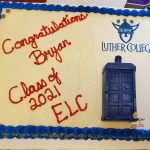 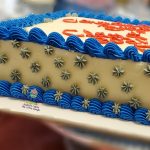