I know we’ve all been hearing lately that the 2013 Farm Bill may not pass, well according to so many news articles the current Congress is clearly overdue by two years. What does it mean? It would mean that without action, parts of the law will revert to the original 1938 and 1949 versions, resulting in milk prices as high as $7 a gallon. One reporter,  Ed O’Keefe, who covers Congress and politics for the Washington Post, reported Monday that the House and Senate calendars show only five days in which both bodies will be in Washington at the same time. The House of Representatives has only nine days on its “month,” ending Dec. 13, and the Senate will be in town only from Dec. 9-20. 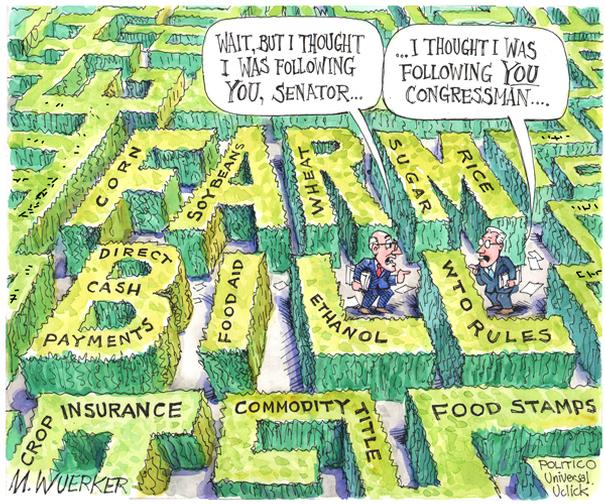 What is the farm bill? The farm bill is the primary agricultural and food policy tool of the federal government. The comprehensive omnibus bill is passed every 5 years or so by the United States Congress and deals with both agriculture and all other affairs under the purview of the United States Department of Agriculture. It usually makes amendments and suspensions to provisions of permanent law, reauthorizes, amends, or repeals provisions of preceding temporary agricultural acts, and puts forth new policy provisions for a limited time into the future. Beginning in 1973, farm bills have included titles on commodity programs, trade, rural development, farm credit, conservation, agricultural research, food and nutrition programs, marketing, etc.

How will this affect me and my business? Well for starters let’s just get this out in the open first, I won’t raise my prices reflecting on the dairy products that are intertwined with the milk products until it starts to hurt my business. Then again on the “flip” side of it, you will also be paying the same costs for your dairy products that I will be paying for. Until this actually happens, I do not see a point for it to be changing my costs as they are now.

We all know how it works in politics, that’s why I chose to be a baker. It’s easier to accommodate customers rather than the thousands of constituents that are harder to “please”. Most of my customers are, well let’s face it, mainly kids. For now let’s just watch and see what will transpire.